Today, any Women’s Ministries program, event, or gathering being done world wide in the Salvation Army is standing on the shoulders of the legacy that is Home League.

The Home League was started in East London, England by Florence Booth in 1907. The program was so popular it spread to other countries around the world, including Canada, Australia, the United States and New Zealand, within its first 10 years.
The first Home League program in the USA Central Territory (America’s Midwest) was organized in Omaha, Nebraska, before 1910. Other women’s groups quickly developed across the Midwest. They provided educational programs and service opportunities for women. These groups channeled women’s talents, energies and resourcefulness to positively influence their homes, community and world. For instance, during World War I they formed support groups for bereaved mothers. Soon, the Home League was an integral part of every Salvation Army Corps Community Center.
The Home League evolved into a weekly meeting with a fourfold program of worship, education, fellowship and service. In 1987 a Women’s Outreach Ministries component was added to the Home League program to reflect women’s changing roles and expanding interests. In 1998 the traditional Home League program was renamed Women’s Ministries to better convey the wide variety of programs offered to women.
In 2007, during the 100 year celebration IHQ shared that, “Though the original name ‘Home League’ has been updated in some areas of the world, women’s ministries have gone from strength to strength and now have more than half a million members in 111 countries. The emblem, a house on the Bible, has been adapted to many cultures, and the fourfold aims of worship, fellowship, education and service have been immensely empowering to women worldwide.”
Whenever ground is broken to establish the work of the Salvation Army in a country, one of the first ministries installed is a Women’s Ministries program. When ministry operation began in Madagascar, the 128th country the Salvation Army has established work in, Women’s Ministries promptly began.
In 2016, the USA Central Territory Women’s Ministries transitioned to the title Central Women to further encompass and welcome women into the ministry.

Click below to view historical images of Home League gathering and encouraging women! 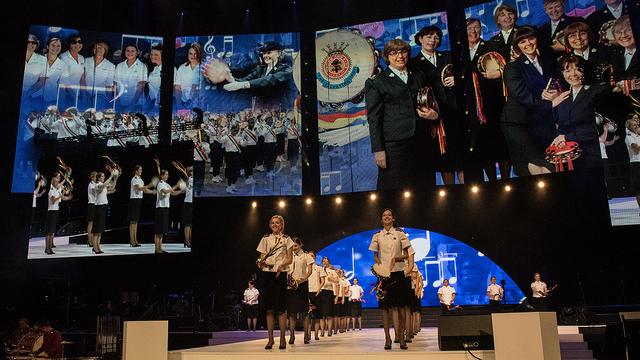 Life After the Event: Boundless and Beyond

Ever heard of FOMO? If not, it’s an acronym for: fear of missing out. If you’re like ...

Week Two: Advent Devotions – How Can This Be? Pt. 2

Like most people facing something unexpected and potentially tragic, Mary asked, “How can this ...